Nestled behind downtown in Santa Rosa, California lies the Museum of Sonoma County. During the summer of 2019 I have been working there as a curatorial intern. This was not the first time I have worked for this Museum; for several years I was a docent there.  The year after my son was born, I quit working full-time but needed something for me, for my sanity. That is when I first started volunteering at the Museum and began my career as a museum professional. Shortly thereafter I applied to the Museum Studies Graduate Program at the University of San Francisco. I have always loved visiting museums and wanted to share this passion with others. As a docent and curator, I possess the ability to weave stories with the objects and connect people with art. 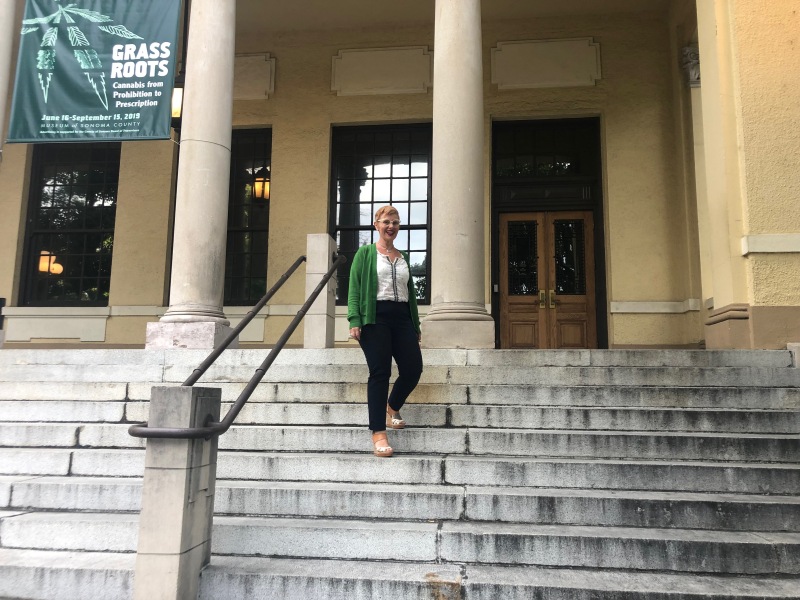 Ginger Daley on the front steps of the Museum of Sonoma County. Photo by Robert K. Daley

My favorite objects in the collection of the Museum of Sonoma County are a pair of watercolor paintings by Elizabeth Hoen. Hoen bears a significant history for Sonoma County: she was the daughter of a pioneering family that settled in Santa Rosa California in the 1800’s. Her father erected the first non-Native American structure in the valley that is now known as Santa Rosa. It was a trading post. He also laid the groundwork for the Santa Rosa downtown area and the Hoen name can still be seen in Santa Rosa on street signs and around town on names of buildings. Elizabeth Hoen was a known watercolor impressionist painter. She showed her work in the San Francisco Artist Association in 1917 and also worked extensively in Los Angeles, where she held a studio. 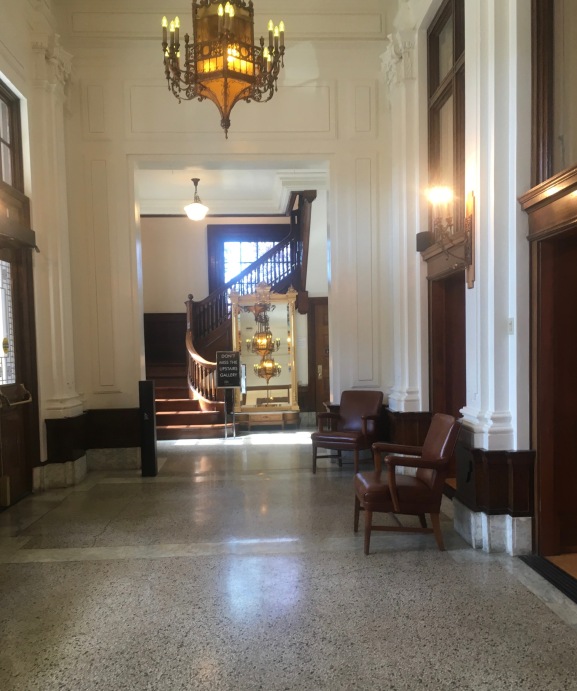 Front lobby of the Museum of Sonoma County. Photo by Ginger Daley

The paintings that are part of the permanent collection at the Museum of Sonoma County are small landscape scenes from the Redwood forests. The two paintings could stand alone but complement each other well when paired because the subject matter is almost the same. The composition and color palette are quite different. In one of the scenes, the trees are sparse and look like they are beside a turn in the road; the skies are blue. In the other scene, the skies are a light ochre, the trees are in the distance but look like a heavy forested area. I imagine one of these paintings were painted in the late morning and the other in the late evening. In each of the landscapes, the skyline is ambiguous and there is a hazy effect. After living in Sonoma County for the last nine years, I can almost see where these scenes are. Hoen possesses an attention to detail that is able to convey the mood of the Sonoma landscape.

Elizabeth Hoen “Along the Russian River” 1908. Photo by Ginger Daley

These paintings are in pristine condition but not on display permanently. I had the chance to see them last year when the Museum held an exhibition on Northern California Landscapes from the late 19th and early 20th centuries. It was the first exhibition that I ever gave a tour on as a docent. I am typically not a fan of landscape paintings but needed to immerse myself in the subject because I was giving the tours and wanted to be knowledgeable. These little paintings stood out to me amongst the other more well-known artists like Thomas Hill, William Keith, and Lorenzo Latimer. One of the first things that drew me closer to these objects was their frames. The material is not listed but they look as though they are thick redwood. The wood is cut into smaller rectangular sections and then pieced together with varying grain. It creates an “against the grain” type effect and catches the eye. Many times, the thing about an object that inspires me is not typical. In this case, the frames are not technically part of the object at all! I can imagine the workmanship that it took to create them so many years ago, with rustic tools and it impresses me. 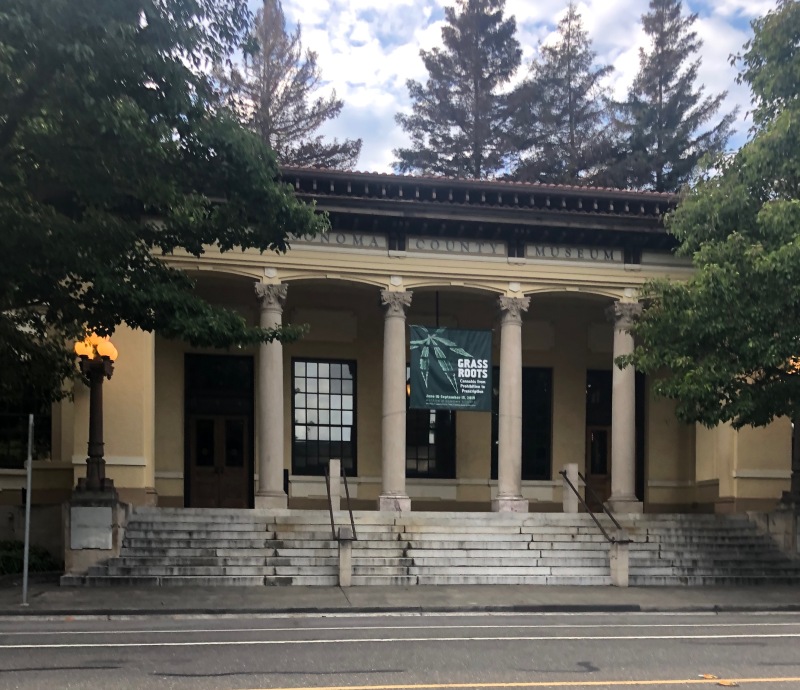 The Museum of Sonoma County’s history exhibition space is housed in an historic post office building. Photo by Ginger Daley

Part of the Museum’s mission is to inspire the community with “relevant” art and I would say these paintings by Elizabeth Hoen support that aspiration. Given her family’s important role within the development of the Santa Rosa area, she is an important artist to collect and show. Hoen had amazing skill as an American impressionist painter and I always wonder if she had been another gender would her work have become as popular as some of her male contemporaries. Since the Museum is actively collecting art from this period, I would be curious to know if there were more women to show. I would love to see The Museum of Sonoma County show an entire exhibition of overlooked women artists from the turn of the century.